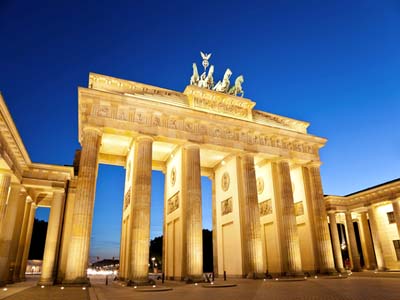 Explore all the culture and beauty that Central Europe has to offer. Make the most of your 14 day vacation through lively guided tours and sightseeing!

Package Excludes: Gratuities for guides, drivers but can be prepaid for $176 per person, other meals which are not included on the itinerary, travel insurance

Day 1: Frankfurt, Germany
During the day, enjoy exploring the sights and sounds of Frankfurt. Tonight, meet your Tour Director and fellow travelers.
Hotel: Leonardo Royal Frankfurt or Mercure at Friedrichsdorf

Day 2 Frankfurt–Weimar–Berlin
Head northeast today using the Autobahn for a stop in Weimar, one-time intellectual heart of Germany and host to such luminaries as Luther, Cranach, Bach, Liszt, Schiller, and, of course, Goethe himself. It was at one time rightly known as the “Athens of Germany.” Journey past Jena, home to the world-famous Zeiss Optics Factory. Over the Elbe River for a few more miles into Germany’s capital city, Berlin. (B)
Hotel: Abba or NH Alexanderplatz or Holiday Inn Express City Centre

Day 3: Berlin
On this morning’s included guided tour; learn how the city is no longer divided but every bit as fascinating. Once the city of contrasts with its West and East side separated into two different worlds, since the fall of the wall, Berlin has developed into a harmonious blend of old and new. It has preserved the old buildings, such as the State Opera House and the Brandenburg Gate, its neoclassic-style boulevards, such as the Kurfürstendamm and Unter den Linden, and it has created brand new buildings in the most daring, up-to-date architectural styles. It is once again Germany’s capital and one of Europe’s most lively and interesting cities. In the afternoon, join an optional excursion. (B)

Day 5: Warsaw
The included sightseeing tour is an excellent introduction to Warsaw, magnificently reconstructed after wartime destruction. Today, its wide avenues contrast strikingly with the narrow lanes of the old section. (B)

Day 6: Warsaw–Jasna Góra–Auschwitz–Kraków
Two encounters with history on your southbound journey today. First, JASNA GÓRA near Czestochowa, the monastery that withstood the repeated onslaught of overwhelming Swedish forces during the religious wars of the 17th century. Since then, its Black Madonna is venerated as the “Queen of Poland” and has become the country’s national symbol. In the afternoon, visit what is left of the Auschwitz CONCENTRATION CAMP, a chilling remembrance of the Holocaust. Evening arrival in Kraków. (B, D)
Hotel: Swing or similar

Day 7: Kraków
This is, they say, Poland’s most beautiful city. For almost 500 years it was the country’s capital, and today it is without a doubt its cultural capital. Optional morning sightseeing in ancient Kraków, once the residence of Polish kings for centuries. See the Market Square, the Jewish Quarter, St. Mary’s Church, and Wawel Cathedral. Free time later to explore this interesting town at your own pace and mingle with the locals. Tonight’s optional folklore dinner might be the way to round off your stay in this city. (B)

Day 8: Kraków–Budapest, Hungary
A comfortable drive through three countries. First, south to the Tatra Mountains of Poland, then through a scenic part of Slovakia, and finally into Hungary. Your destination is Budapest, the liveliest of Eastern European capitals. (B, D)
Hotel: Novotel Centrum or Aquincum or Leonardo

Day 9: Budapest
Included sightseeing features Buda Castle, which dominates the twin cities of Buda and Pest, separated by the broad ribbon of the Danube. Also see Heroes’ Square, which typifies the modern capital, as well as the old inns along the riverbank, Parliament, Margaret Island, Fishermen’s Bastion and the Royal Castle. (B)

Day 10: Budapest–Vienna, Austria
Head for the Austrian border by way of Györ. You’ll be in Vienna in time to enjoy the afternoon and evening in the capital. Enjoy the included sightseeing tour with a Local Guide: the State Opera, Parliament, and the Town Hall. Stop for a stroll in Heroes’ Square to view the Hofburg and an inside visit of ST. STEPHEN’S CATHEDRAL. (B)
Hotel: Bellevue or Kavalier or Star Inn Schönbrunn

Day 11: Vienna–Prague, Czech Republic
Morning optional excursion to Schönbrunn Palace. This afternoon, cross the Czech border into Moravia, then through the rich farmlands of Bohemia to Prague. (B, D)
Hotel: Clarion Congress or NH Praha

Day 12: Prague
The wealth of gothic and baroque architecture perhaps inspired Dvorak and Smetana, both Prague composers. The included guided sightseeing features landmarks such as the Jewish Quarter, Charles Bridge, and the Old Town Square with the Astronomical Clock. Your Tour Director may suggest an evening optional excursion with traditional Czech music and spectacular entertainment. (B)

Day 13: Prague–Munich, Germany
Into the landscape of the Bohemian Forest before reaching the Czech-German border. Drive south, enjoying the Bavarian scenery, to Munich, the “Secret Capital,” for an orientation drive. (B)
Hotel: Tryp or Ibis Parkstadt

Day 14: Munich–Nördlingen–Rothenburg–Frankfurt Area
The highlight today is undoubtedly the Romantic Road, which runs north to south as far as the Alps. First to lovely medieval Nördlingen, then Rothenburg with its ramparts and towers, cobblestone streets, and 16th-century houses, before heading towards the Frankfurt area. (B, D)
Hotel: Leonardo Royal Frankfurt or Mercure at Friedrichsdorf

Day 15: Frankfurt Area
Your vacation ends with breakfast this morning. (B)

Claire Newell is a travel expert, author and a recognized authority on the international travel industry. She is the founder and owner of Travel Best Bets, one of the largest agencies in Canada and the best-selling author of Travel Best Bets – An Insider’s Guide to Taking Your Best Trips, Ever. She has appeared in top broadcast and print media throughout U.S. and Canada over the last 22 years, including Canada’s Global TV network, NBC’s Today Show, Fox & Friends, CNN, and others. Claire also writes regularly for print and online publications including Readers’ Digest, Today’s Parent and more.

All rates are per person, based on double occupancy in Canadian dollars (unless otherwise stated) New bookings only. Space and price may be limited and subject to availability at the time of booking. Terms and conditions apply. Tax is not included in the above base fare. Above tax amount includes $30 per adult Booking Management Fee.  Not included in the above rates: Xpresspost fee, recommended medical, cancellation or baggage insurance. Price Match Policy: Travel Best Bets makes every effort to remain competitive by offering our ‘Match or Beat Any Price’ offer however due to certain restrictions there will be some product we cannot match or beat. BPCPA #3287